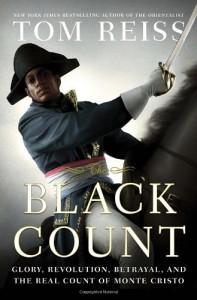 So the cover picture is quite dashing and despite the fact that I listened to it in audiobook format, Scribd displayed the picture quite prominently on my screen... which resulted in an amusing moment where another person caught a glimpse of it before I could hide the window and I am sure they thought I was reading some trashy romance because their face scrunched up and they started laughing. Whoops! (^_^)

In reality, this is about the father of French author Alexandre Dumas, père (AKA that guy that wrote all those books they make movies based on). It encompassed his entire life from his childhood in the Caribbean to his death in semi-exile in France. The family's ancestry is discussed along with the complex sociocultural issues of the time in relation to attitudes about slavery, the effect of the American Revolution, the Napoleonic wars... Honestly, it is so fact-heavy that it was mind-boggling at times as my personal knowledge of history had to be rearranged in my head to make new connections with somewhat obscure topics like the French founding of Egyptology or Parisian theatre traditions in former French colony islands, etc.

As for the audiobook: male narrator, neutral tone with just enough inflection on the ironic points but not particular stand-out in any other way.

(I listened to this months ago and wrote up this review in June and it's been languishing in my drafts till now, but I stand by the 4.5 star rating.)