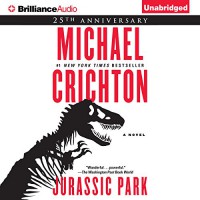 Streamed this off Audible. This edition is 15:10:10 exactly and narrated by Scott Brick.

I love it. That's it. Scott Brick's voice is amazing and he maintains the individual voices of each character perfectly 99.9% of the time. (I can excuse that slip on Muldoon's dialogue in that one scene because the character was drunk at the time anyway; let's just chalk it up to method acting.)

Nedry's death scene in particular was extra chilling despite how many times I have reread this book in print.