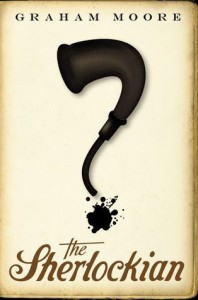 There are two stories going on here:

1) In contemporary times, a fanboy is initiated into an exclusive club for Sherlock fans (thus the term Sherlockian is used quite often afterwards) and they all gather for a special event: another celebrated BNF has found Arthur Conan Doyle's lost diary and is going to share it. Except he ends up dead. Murdered, naturally. And why call the police when you have a bunch of wanna-be Sherlocks hanging around the place?

Honestly, I would probably go see a movie adaptation of this book purely for that scene in particular.

The mystery escalates of course. There is a Woman involved. And it all ends at Reichenbach.

2) In the Victorian era, Arthur Conan Doyle has just killed off Sherlock Holmes and suffers the consequences from the fans of his time. He is a top-notch drama queen about the whole thing (given a modern reader's foreknowledge) but eventually gets over it. Until he becomes involved in serial murders, "anti-feminism", and escapades worthy of Sherlock Holmes himself.

Extra spoiler: his being miffed at being treated as the Watson at one point.

I loved the fact that Bram Stoker is basically his sidekick and the author writes about Conan Doyle's reflections on his relationships with J.M. Barrie and Oscar Wilde with such depth of emotion; I have no idea if the real life people knew each other, but I would be inclined to believe it based on the presentation of this historical fiction.

Ultimately a happy ending because, as we all know, Sherlock Holmes comes back to life.

Audiobook notes: no idea if the Scottish accent of the narrator is authentic, but I like it. <3