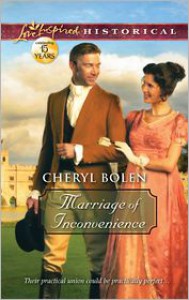 I don't remember why I wishlisted this. I have a thing for regency romances, I think. (Hello, Mr. Darcy.)

Quick read, or rather it is better as quick read. Don't slow down to think about how the motives of the heroine to get married change radically between one page and the next. It is a bit annoying that the male protagonist figures out the heroine's "super secret identity" in the span of about 3 paragraphs when no one else in the country ever realized it, yet he keeps the secret for the majority of the story only to hold it over the heroine's head at the end. Sigh.

I liked the focus on development of the characters (even if their motivations and internal monologues were so wishy-washy at times) and emotional romance instead of physical romance. Also, it is adorable that winning over a large family of step-children is one of the heroine's goals. (Spoiler: she succeeds!) I wasn't particularly keen on the blatant Americanisms thrown in - no, it is not cool to move to England with the sole intent and purpose of tearing down their cultural system because it does not jive with your contrived American sense of "freedom and equality" and the way you intend to accomplish this is by fulfilling your princess countess fantasy by marrying a peer with influence with the government. WTF.

But, ahem, other than that, and with a great deal of reminding myself that it is just wish-fulfillment  historical romance fiction, it was a cute story. :)