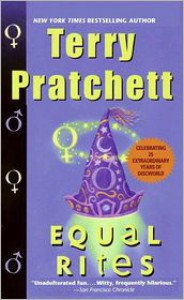 Finished this up today. Not quite as riveting as the first two Discworld books, by which I mean that I didn't feel compelled to devour it within hours. It actually took me an embarrassingly long time to realize that the reason it didn't seem as funny is because all of the jokes were about sex. Once that clicked in my head, I started to pick up on the humor a bit better and the pages passed more quickly.

Although this book was next in my chronological list of Discworld books, it doesn't feature the protagonist(s) of the first two books, instead introducing new characters as far as I could tell. I grew to like the main character, Esk, but it was definitely a slow-building sort of affection. The pointed satirical commentary on the education system and the, well, I guess you could say medicinal field, pulled a few chuckles. +1 for the ultimate triumph of girl power over the Unseen University. :)