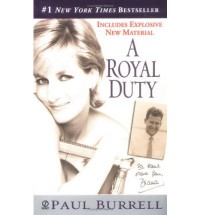 Eh, a solid 3. I didn't realize that I had started this book about 2 1/2 years ago but never finished it because life. Clearly it wasn't engrossing enough that I had-to-must-read-now-now-now-read-it! As an insider's reference, it is surely invaluable. I noted with amusement how it was one of the citations in Sex with the Queen when I read that book. The author, Paul Burrell, worked as a servant inside Buckingham Palace, working for Queen Elizabeth, then Prince Charles and Princess Diana, then working solely as Diana's butler. As a result, he talks at length about the duties of being a modern day servant, including the anachronistic traditions, the politics and inter-personal relationships behind the scenes, and, of course, about his relationship with Diana.

To be frank, the whole book reads like a contemporary version of one of those historical fiction novels of the servant who is the closest confidante of the king/queen - they alone will save their master and, thus, prevent the destruction of the realm!!!

Yet I actually do believe the account as being truthful. He confesses to his own weaknesses freely, perhaps even too critically, and scorns the inefficiencies of the bureaucracy that led to his own arrest under suspicion of theft after Princess Diana's death in the late 90s. He spills the beans and names names except when it comes to the most private aspects of Diana's life, specifically it seemed that he avoided mentioning the names of her lover(s). His account can be compared more to that of a whistleblower, desperate to get his side of the story out into the public.

It boggled my mind that people could be so... subservient is not the right word, but accommodating is not strong enough. Burrell was, and still is probably, obsessed with Diana, not in a sexual way, but to the point where he literally could not function when he was not allowed to work for her or towards her memory after her death. Likewise, he mentions repeatedly that Diana's friends supported her in great ways, but if you have a dozen or so people going to the lengths those people did, either you're a saint (no, she was very vindictive, evident in even Burrell's biased words) or exceptionally needy. I can't help it but my personal feelings about certain archetypes colors my perception on subjects I read about.

The epilogue was an addendum to the book in which Burrell mentioned that within the UK there was still a lot animosity towards him, but in America and elsewhere abroad he was regarded as a good man for doing what he did for Princess Diana. I think he nailed it on the head when he said the aristocratic and classist culture of England played a large unspoken part in his story. Food for thought.