To Marry an English Lord 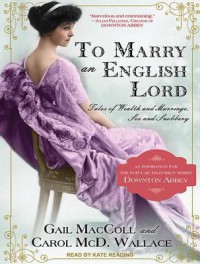 Tedious towards the end. I enjoy reading little anecdotal bits, excerpts and quotes from personal correspondence and autobiographies or memoirs, all that jazz. But the conjecture as to what the stereotypical "average" American heiress felt or thought or did was verging on becoming its own novella and the entire last 300-400 pages was like the author's own version of Burke's Peerage. And after my last entry about 16% in, the pictures and quotes became increasingly more random. What is the point of a picture of a building discussed 7 pages ago? Or a childhood picture of someone who was of no significance or relation to the culture/topic until they were adults?

Eventually it just seemed like the pictures were just padding for a meandering collection of historical etiquette, the author's personal thoughts, and bits and bobs of archived photos and sources without any overarching purpose, original ideas, or theory connecting any of it together. Not horrible, and individually the sections are interesting; I was more disappointed by the fact that more than a third of the book was useless information. The 100+ page index is something I could grudgingly allow, but the rest! - ugh, what a waste of paper in the printed copies of this book.

Some redeeming points made:

+ Attempts at recreating Old World classism in America didn't/doesn't work because "a distinctive feature of American society: there is always new money."

+ Social climbing was a bigger concern in American; England didn't care because they had the peerage.

+ After the Civil War, "a third Anglo-American war was not thought to be out of the question."

+ "The girls at the balls, clacking open their plumed ivory fans, dance cards dangling from their wrists, were really mere goods on display, the men stepping into the ballrooms doing up the last buttons on their dance gloves just shoppers - wary of being cheated, eager to make a deal, or pleased to be able to afford the best."

+ The observation that still rings true today: "In America, rank was only relative: it had to be measured against someone else's."

+ The observation that Newport in the late 19th century was run entirely by women, making it a social hot spot; compare with Primates of Park Avenue on the absence of men in the elite women's favored areas of retreat from city life.

+ Wealth and social status don't necessarily equate to modernity; the entire book being about impoverished nobles marrying American girls for their (family's) money, the irony being that their revered ancestral homes being completely lacking in contemporary hygiene facilities or conveniences.

+ "America, with its emphasis on youth and its constant awareness of children as the hope of the future, made much of its offspring." Compare with Primates of Park Avenue (?) about children as part of family workforce outside of US vs. children as objects/symbols within US.

+ "The self-appointed American aristocracy was actually nothing more than an ornate version of the middle class." Still is~ ha. Also, desegregation of class by material wealth and the shift towards wealth/status by accumulation of service goods.